A Legendary Getaway Since 1894

Legend has it that the Potawatomi Indians, the original tribe of the area, called the lake “Me-shay-way-o-deh-ni-bis” or Great Elk Heart Lake. It was so called because of its general shape resembling an elk’s heart. The Native Americas also believed the water of the lake to have curative powers. If they bathed in them, they would be “rejuvenated and handsome again.” To this very day, because of those tens of thousands of springs that feed the lake, it is still considered to be one of the cleanest lakes in Wisconsin. Read the full history below! 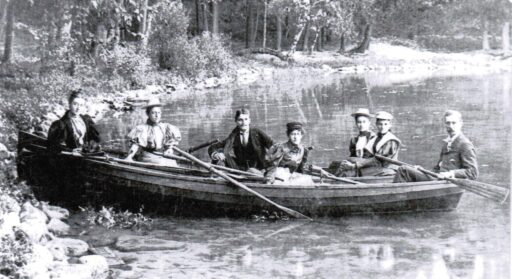 Well known among local tribes was a handsome young warrior who proved his bravery by slaying an elk and devouring its heart – thus becoming known as Elkheart. Attracting the favor of many young maidens, Elkheart began wooing one named Silver Birch. But his eyes soon strayed to another beautiful maiden known as Singing Bird, leaving Silver Birch heart-broken. One night as the new lovers paddled out on the lake, an arrow from the bow of the dejected Silver Birch pierced Elkheart, who fell into the deep water. Horrified, Singing Bird plunged into the water after him, followed by a sorrowful Silver Birch, who drowned with the ill-fated lovers. Now, when the moon is full, the spirit of Silver Birch passes over the lake crying the name Elkheart. 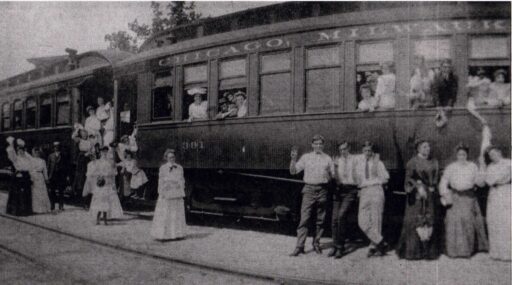 As the center of the village, Elkhart Lake’s famous rescued and restored depot stands as a reminder of the town’s history and what made the village a first class resort destination. Elkhart Lake’s early growth is attributed, in part, to the arrival of the Milwaukee and Northern Railroad to the village in 1873. Before, visitors traveled to the area by horse and carriage or by horseback. The railroad brought passenger trains full of vacationers, race enthusiasts, gamblers and gangsters alike from Chicago, Milwaukee and Green Bay stepped onto the passenger platform at the village’s depot. Passenger trains no longer make regular stops but the railroad track remains regularly maintained. 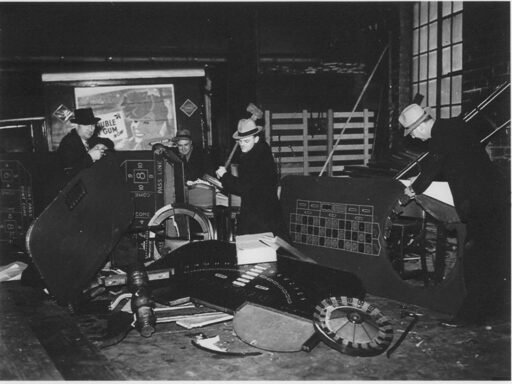 Elkhart Lake could not escape the wave of illicit gambling in the early 1900s. Illegal gambling became the accepted standard in the state and, for all of its resort charm, Elkhart Lake became touted as a gambler’s paradise. The popularity of the slot machine among resort visitors took the village by storm. With the Roaring Twenties came an influx of roulette and poker at four well-established Elkhart Lake gambling halls. The end of this legendary era was signaled when, after years of lax enforcement, Elkhart Lake’s infamous Paddock Club was raided and gambling equipment destroyed. 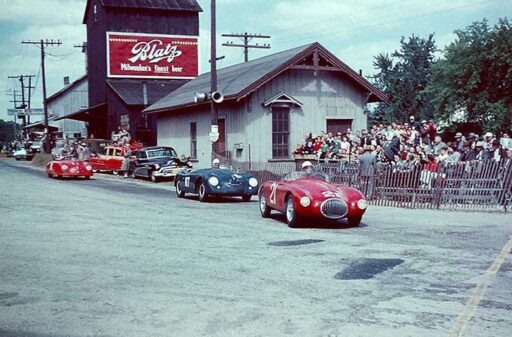 Open road racing over the hills and around the curves of Elkhart Lake gained prominence in the early 1950s. Now landmarked, these early closed-loop courses around the lake drew sports car racing enthusiasts from across the Midwest and led to the development, 60 years ago, of Road America – a rolling four-mile track near the village. Long recognized as one of the premier road racing tracks in the world, Road America has become legendary. It is a favorite spot for the sport’s best professional and celebrity drivers of every type of racing vehicle from motorcycles to Indy cars.

In 1886, German entrepreneurs Otto and Paulina Osthoff built a large summer resort; Otto Osthoff’s Hotel. The hotel could accommodate 120 guests. A pavilion was later added which provided for additional rooms and dining space. In 1940, they opened The Funspot, a beautiful art deco bar and dining spot with the obligatory gambling devices then present in Elkhart Lake. In 1955, Osthoff’s was sold to Sulie and Pearl Harand of Chicago. The Harand Camp of the Theater Arts specialized in teaching drama, song interpretation and ballet. Through the years, thousands of children attended the camp, learning how to be at home on and off the stage. Plays were performed at the camp and at the Forrest Tucker Theater at Siebkens. The camp continued operating until July of 1989 when Dairyland Investment Company purchased it to build The Osthoff Resort. The camp was demolished in the spring of 1990. South Lake Street was rerouted to create the beautiful lakefront, beach, pond, gardens and brick-walking path, which are now a part of the resort. The new Osthoff Resort opened in June 1995.

In 1872, William Schwartz erected a hotel named the Rustic House. In 1876, additions including a dining room, sitting rooms, a parlor and a 100-foot pier. In 1879, brother John took over operations of the resort and promptly renamed it the Lake View House. It was located on the north side of the lake and could accommodate 100 guests. This hotel was destroyed by fire in 1890 and rebuilt in 1891. In 1881-1882, William began constructing a new building on top of the hill. According to the Plymouth Sun, “The building will be eight stories with a piazza on every story. There will be water in every one of the 28 sleeping rooms and it will also include a dining room, parlor and kitchen.” In 1890, the building was destroyed by fire but was rebuilt and completed in February of 1891. In 1896, it was renamed The Schwartz Hotel by its new owner Sigmund Bloomfield. In the 1980s, it was known as Barefoot Bay. In May of 1999, resort renovations were completed and it was renamed Victorian Village Resort until 2018. Today, this special resort is known as The Shore Club.

In 1883, William Schwartz built the three-story Belleview House to accommodate 75 guests. This resort included an opera house and a greenhouse that provided greenery for his two resorts. In 1916, Herman Siebken purchased the hotel and renamed it Siebkens Resort. In June of 1918, boasting reservations from NY, IL, and AK, they offered swimming lessons at the Siebkens pier and picture shows in the Elm Park Theater. It also became a tradition that groups of German singers spending the weekends would serenade the guests. Over the years their arrival was eagerly anticipated. The tradition of singing groups would continue for over 70 years. Herman’s daughter, Olive (Ollie) returned to the resort to help after Laura (Herman’s widow) died in 1941 and in 1946 she became the sole owner. Her love of antiques turned the entire hotel into a large antique store; guests of Siebkens Resort enjoy her fine taste in antique furnishings today. She ran the resort until 1977 when her daughter, Pam and husband Douglas Lueck purchased the resort and continued its German heritage and then passed it onto their daughters, Laurie and Lisa. In recent years, Wendy and her husband purchased the hotel and continue to keep Siebken’s traditions alive, while innovatively continuing to keep the property evolving during modern times.